How Old is this Rock?

Posted on February 11, 2007 by Thermochronic

I had originally meant to take on the Just Science week Challenge, where I’d write a new entry every day about science and science only, no Bears, no music of the week, no asinine and unproductive bill brought up by some pandering politician. But, I flaked. Brian of ..Or Something fame kicked this challenge’s ass. But, I decided that instead of daily posts, why not one ginormous one, guaranteed not to be read by even my most dedicated friend? So here you go, the science of Geochronology. I intend to come back to different aspect of this topic in the future, just as I have discussed it in the recent past.

Geochronology is an umbrella term for all of the techniques we use to determine the absolute ages of rocks and/or individual minerals. All modern geochronology is based on measuring the stable daughter atoms produced during the radioactive decay of naturally occurring elements, most notably uranium (U), thorium (Th), potassium (K), rubidium (Rb), and lutecium (Lu). It is now common and fairly simple to measure the absolute abundances of these elements in rocks, or in many cases individual crystals, with a high degree of precision. As a geochronologist, the real work comes with figuring out what those ages mean.

The title of this post is a question I’ve been asked many times, and in truth is impossible to answer. Rocks have very complex lives and change continually on a variety of timescales. Each radioactive parent and stable daughter nuclide has specific characteristics that determine their inclusion and retention in geologic materials. When you date a rock you are really dating some event or process that the rock experienced. Some systems can be interpreted to record the age of formation of a rock. Others record the time when a rock cooled to a certain temperature. I’ve seen geochronologic data misused by lots of different kind of people. There is of course the young-earth crowd, but I really don’t want to waste time on them (in this post). What is more disconcerning from my standpoint is how often I have seen data misused by trained geologists. In the past year I’ve seen talks where sanidine K-Ar ages from the 1970’s were compared with U-Pb ages from the 1950’s; I could tell that the speakers grasp on the philosophy and method of geochronology was simply nonexistent. I am more lenient when non-geologists misunderstand radiometric dating techniques, but when the data is something that you depend on, well….What it really comes down to is:

Calculating an age is pretty straightforward, all you need to know if

When I’ve taught radioactive decay to classes in the past, I’ve found that one of the biggest mental stumbling blocks that students have to overcome is how a process which is completely random on the scale of an individual atom (whether or not it will disintegrate) can, on a larger scale, be completely predictable. It is of course all a probability thing, each radioactive atom has a specific probability that it will decay (the decay constant). Below is a graph of observed decay rates from a “radioactive parent nuclide,” compared to a expected line. 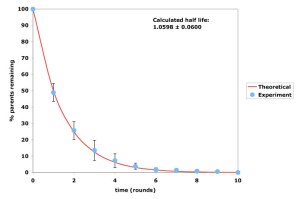 Actually, these particles aren’t radioactive, they are chocolate. These are the results of the great M&M experiment from a class I taught in 2004. M&M’s, it turns out, are fantastic for illustrating this principle (pennies would work just as well, but for some reason the classes are never as enthusiastic about those.) M&M’s have an “M” printed on only one side of the candy. So, you put 100 of these in a paper cup, dump them out onto your desk, and count the number of pieces that landed with the “M” side up. These are considered to have decayed, so you remove them, place the undecayed candies back in the cup, and repeat until all of the M&M’s are gone. I even had them calculate an M&M “half life”, the result of which you can see in the corner of the graph (± 1 sigma). I’d have groups of students do this with 100 pieces 5 times each. Then we’d compile the data as a class. Most people are comfortable with the idea that you have a 50/50 chance of an M&M landing heads up, but if a particular piece decays is random. This is directly analogous to the decay constant for a radioactive element. Each atom has a specific chance of decaying. The only real difference is that decay constants are in terms of some time value (per year, second, etc..), while the M&M decay constant is in terms of “rounds.” These results are always impressive to me, that we can get such good results from ~4000 “atoms,” especially when the average zircon used for U-Pb geochronology contains hundreds of trillions of U atoms, boo-yah, counting statistics.

U-Pb geochronology is unique among geochronometers in that it is actually two separate decay systems in one. There are two relatively abundant naturally occurring isotopes of uranium, 235U (which decays to 207Pb) and 238U (which decays to 206Pb). 238U is by far the most common (now), but every crystal or rock or anything that has 238U also has 235U. The 238U/235U ratio is actually exceedingly well known; it probably ranks up there among the best known numbers in physical science (thanks to the nuclear weapons industry). Why is this number so constant? Well, because different isotopes of U have the exact same chemical behavior, so they are never fractionated. But, fractionation is a topic for another post. What is important though, from a geochronological standpoint, is that every time you measure a U-Pb age, you are actually making two completely independent and separate geochronologic age measurements, one for the 238U-206Pb system, and another for 207U-235Pb. 238U has a longer half-life, and therefore decays more slowly.

This figure shows the evolution of different U and Pb isotopes in a closed system over time. Basically, start out with 1000 atoms of 238U and 235U, and let them evolve for 4.5 Ga. In truth, of course, the materials we use have trillions of times more U, and 238U and 235U are never equally abundant, so I’ve normalized the graph. But, you see the point. The solid lines are U, with red being 235U and blue 238U. The dashed lines are Pb, with red 207Pb and blue 206Pb. Either one of these can be used to calculate an age. But, the real power of the technique comes when we use both. Because the decay schemes are independant, the ratios evolve separately. But, if ur measurements of the decay rates are correct (which they are), then the ages from the two systems should agree. The collection of agreeable isotopic ratios is referred to as concordia.

The red dots represent specific time values, and the blue line is called concordia. U-Pb age determinations which fall on this line are called “concordant.” There are a variety of processes which can cause ages to fall off of concordia (Pb-loss, multiple crystallization events, etc..), which actually lends more power to the technique. So, every time someone calculates U-Pb ages, they are actually also double-checking the decay constants of the isotopes. If these changed over time, as a few non-scientists claim, then concordia could never work. We actually use the above diagram, called a Wetherill plot, and a similar plot

called a Tera-Wasserburg diagram, to evaluate U-Pb data. These two methods have their different strengths, which I won’t go into here (right now at least.)

U-Pb geochronology has a lot of other advantages. The primary crystal we analyze, zircon, does not like to incorporate Pb into it’s crystal structure, which means that almost all of the Pb we measure is the product of radioactive decay (U likes to substitute for the Zr in the zircon structure.) Zircon is also great, because it is very common in rocks, and, as people like the famous ..Or Something wrote about, is tough enough to survive significant erosion and transportation and therefore pops up in sedimentary rocks all the time, giving a great deal of insight into sources and transport of sediment.

It also turns out that Pb does not diffuse out of zircon very quickly. In many cases, even if the system has experience really high temepratures, high enough to melt many common rock forming minerals (quartz, felspar..), the zircon will survive and retain it’s U and Pb. If you have carefully evaluated the textural relationship of the zircon to the rock, you can often say that the zircon U-Pb age marks the time of crystallization of that crystal, and perhaps that rock.

K-Ar dating, or the more powerful Ar/Ar variant, works essentially the same way. Minerals like to take up potassium, and one isotope of potassium is radioactive. Minerals don’t generally take up any argon, at least none in the crystal structure. So we measure the amount of K and the amount of Ar and we can calculate an age. The reason Ar/Ar is different is that we can use a proxy for measuring the K content, this makes the measurement process and the information we can recover from a crystal much more powerful. I will post about Ar/Ar geochronology later, I don’t want to go into the details. I think one of the most amazing and interesting proofs of the K-Ar system was published in a 1997 paper by Paul Renne et al.,

In this study they dated ash from the 79 A.D. eruption of Mt. Vesuvius. This is one of the hardest kinds of analysis to do, on a geologic time scale barely any time has passed for Ar to accumulate. But, as shown below, they actually nail the date reported by Pliny the Younger (a recording witness) well within error. 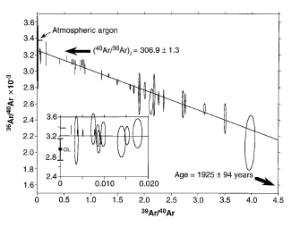 The chemical and physical behavior of Ar makes the K-Ar system very powerful. Unlike Pb, Ar is a light gas, and when a rock is hot, Ar can diffuse out of the system almost instantaneously. We know a lot of Ar exits rocks into the atmosphere, about 1% of what we breathe is argon. Anyways, K-Ar, or Ar/Ar dates don’t really tell you when a rock or crystal formed, but more when it cooled to a certain temperature. This is analogous to the (U-Th)/He system I blogged about here. Different minerals retain Ar differently. So, in the same rock, Ar/Ar ages from 2 or 3 different minerals can help chart the cooling history of the sample. Radiometric techniques that are primarily dependent on temperature are called thermochronometers. The elite earth scientists who use thermochronometers are thermochronologists. Think of thermochronologists as the navy seal or olympic athlete of the geology world.

So how old is this rock? Well, it depends. Do you want to know when that crystal formed? When the rock cooled near the surface? When the crystals that make up that sandstone formed? When the sandstone was deposited? All ages are not the same, but interesting things can happen when you hit the geochronic.

This entry was posted in (U-Th)/He, dealing with data, earth science, geochronology, thermochronology. Bookmark the permalink.

7 Responses to How Old is this Rock?