Posted on November 19, 2007 by Thermochronic

Red Rock Canyon State Park, in southern California, is usually the first stop on the Death Valley field trip my graduate department used to run over spring break. I had the chance to TA this trip once, and went on the trip a few other times. These pictures are from the apring of 2006, the last time I went on the trip, and the last time I’ve been in the area.

The Red Rock area has some spectacular exposures of Miocene fluvial sandstones, eroded in many areas into badlands style topography. During the Miocene, basin and range style extension was active all throughout western North America, eventually creating the corrugated morphology we see today. As I mentioned in this post, as the crust was stretched apart, it was broken into upflited ranges and downdropped basins.

The ranges are beautifully exposed, from California to Utah. Many geologists have made their careers understanding the ranges. The basins though, are buried, and therefore much more difficult to study. There are a few places where the basins have been dissected or are otherwise well exposed, and Red Rock Canyon is one of them.

The pictures are various views of the area, showing the Ricardo Formation dipping to the west. The beds have variable dips, reflecting their deposition during basin formation. In the first picture, I am standing on one of the interbedded basalt flows. In the background of the image you can see a more gently dipping surface. 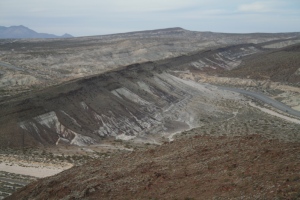 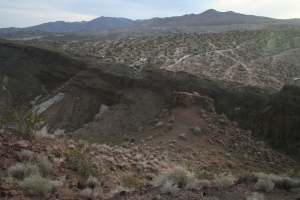 And a close-up of the actual rocks 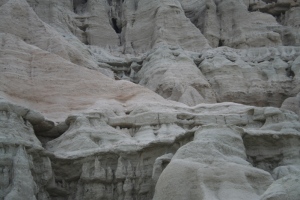 The Ricardo Formation is famous for it’s fossils. This page is dedicated to the paleontology of Red Rocks, and includes boatloads of images of some of the finds. And to finish, some scenery from near the Ricardo campground. 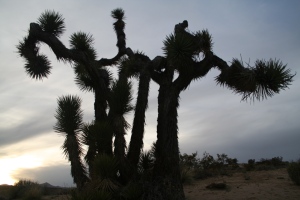 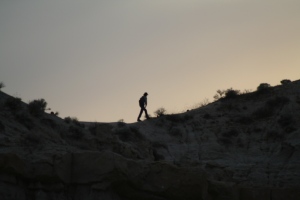 And a student on his way back to camp.

This entry was posted in earth science, pictures. Bookmark the permalink.