This morning I was looking for a post I thought I’d written years ago to help explain the fundamentals of thermochronology. Although I have posts on 40Ar/39Ar and (U-Th)/He thermochronology, turns out I’ve never written a more basic post on the field itself. Genius I say!

So this post will try to take a step back from the methods and focus on the field more broadly. There will be plenty of overlap with older posts, but it’s my blog, so who cares?

We’ll start with geochronology. Geochronology is the name for any technique that can provide an absolute date of some geologic process. In geology, we are almost always talking about dating rocks, minerals, and other geologic materials using radioactive decay schemes, although the recent expansion of luminescence dating methods is an exception. In short, a radioactive parent atom decays to a stable daughter atom with some well-known probability. If you can measure the number of parents and daughters, and if you know that rate of decay, you can rather easily calculate a date. Geochronologists calculate these dates, and then use their skills as a geologist to interpret what exactly those dates mean. Perhaps it is the time a grain crystallized from a magma, or the time of peak metamorphic conditions, or the last time a layer of sand was exposed at the surface. Much of the work we do is that, attempts to put the dates into a geologic framework, and to use them to answer some outstanding geologic question. Calculating a date is rather easy, you just need a few pieces of information. To simplify things, the date you calculate is proportional to the ratio of stable daughter atoms to radioactive parent atoms. The more time has elapsed, the larger that ratio is. I have a separate write up of the age equation here if you are interested in the rather strait forward math.

Thermochronology is similar, however the systems we focus on are those where the loss or retention of the daughter products in the system is controlled by temperature. They are still being produced at the same rate, but what we care about is whether or not they stick around, or more specifically, what conditions favor their retention or loss? If you look at the age equation you can see the central control, an age you calculate is proportional to the ratio of the daughters to the parents in a given system,

Thermochronology then refers to systems where the transition from open (daughters lost immediately) to closed (daughters retained) system behavior is controlled primarily by temperature. It is not the only control, but for a mineral and system to be a good thermochronometer, it needs to be the dominant control.

Imagine an apatite crystal with a few 10’s of ppm U and Th that is therefore constantly producing He atoms. If the crystal is hot, let’s say 200 °C or hotter, then the He atoms easily move through the crystal lattice and escape the system. In this case, D is always zero, so the crystal has an age of zero. If that crystal cools enough, all the way to 15°C for example, then the motion of the lattice has decreased enough that the He atoms are retained, and the daughter to parent ratio starts to increase. If the transition from open to closed behavior occurs over a relatively restricted temperature range, we call that the closure temperature of the system (blocking temperature is also used occasionally). 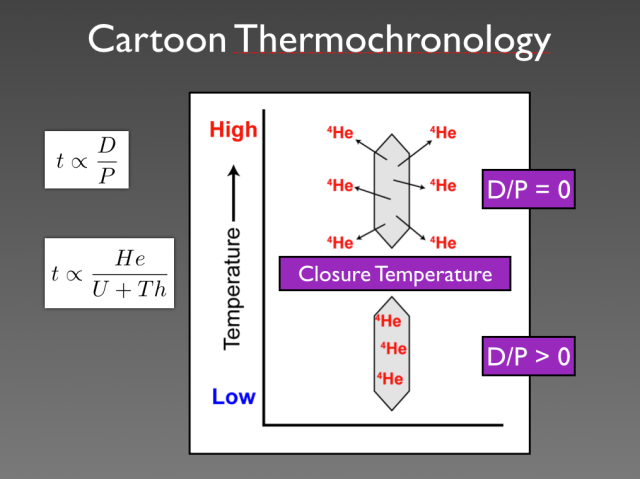 In a cartoony way we can summarize that in the figure above, using the (U-Th)/He system as an example. Each decay system in each mineral has a different closure temperature. The figure below charts out a few of the more common systems, but there are many more.

It should also be noted that the “closure temperature” concept is an extreme simplification of very complicated behavior; thermodynamic shorthand for a wide range of kinetic properties. While useful, it depends on so many different factors and assumptions that it is incredibly important to spend time understanding its derivation and form before using scientifically. Think of the numbers in the above figure as being approximate.

Every geochronometer is in reality a thermochronometer, there is always a temperature dependance on the behavior of the daughter product. For some systems, like zircon U-Pb dating, this is irrelevant, because the closure temperature of Pb in zircon is exceedingly high, you essentially melt the host rock and likely the zircon before you start to get Pb to move. But in most cases, the difference between geochronology and thermochronology depends mainly on what question you are trying to answer, and what rocks you are working with.

Simplistically, thermochronology is best suited for dating the cooling of rocks. Because it generally gets hotter as you go deeper in Earth,  by integrating systems with a range of closure temperatures, it is possible to track the motion of rocks from the deep crust to the surface. Geologic processes that act to cool rocks off are therefore the easiest to date using thermochronology. Erosional exhumation and slip on normal faults are two of the most common processes that cool rocks off; indeed thermochronology as a field grew tremendously through application in environments dominated by extension and/or rapid erosion. 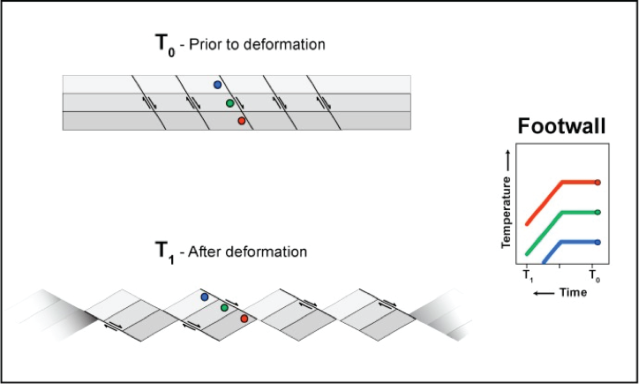 The cartoon above demonstrates how slip on domino-style normal faults can lead directly to the transport of rocks closer to the surface and their concomitant cooling. This style of faulting is common in the Basin and Range Province, and has helped understand the timing of extension throughout the region.

Other geologic processes are harder to date with thermochronology. Thrust faults, for example, are particularly tricky. Thrust faults don’t necessarily cool rocks off; they can create topography that can drive erosion that will cool rocks off, but that can post-date actual fault activity by tens of millions of years, as illustrated below. In fact, only in cases where erosion is very rapid (like in Taiwan), will thrust activity directly cool rocks off. The existence of thrust klippe, however, testifies to how often thrust faults empale material at a much faster rate than it is eroded away. 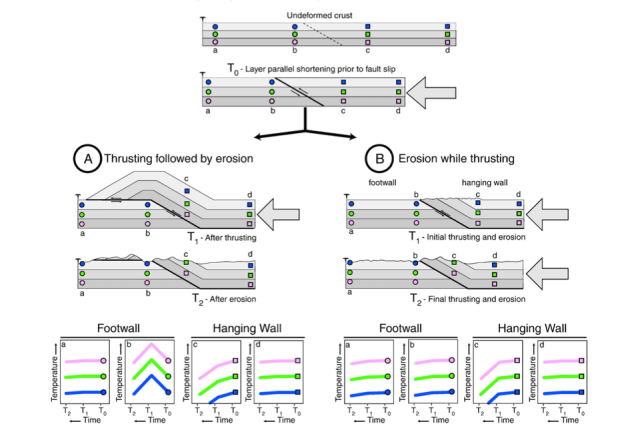 From Metcalf, J.R., Fitzgerald, P.G., Baldwin, S.L., and Muñoz, J.-A., 2009, Thermochronology of a convergent orogen: Constraints on the timing of thrust faulting and subsequent exhumation of the Maladeta Pluton in the Central Pyrenean Axial Zone: Earth and Planetary Science Letters, v. 287, no. 3-4, p. 488–503.

Thermochronology is an incredibly powerful set of techniques, and their application to a wide range of geologic questions has helped add an invaluable temporal component to our understanding of earth processes. They must, however, be used with care and caution, especially in regions where geologic processes that don’t directly cool off rocks, or in fact can heat them up, are present.

The field of thermochronology is incredibly active. In the last few decades there have been huge advances in the number of systems we can use as thermochronometers, and our ability to understand and model thermochronology data. Want to know more? I highly recommend a 2005 Reviews in Mineralogy and Geochemistry volume dedicated to low-temperature thermochronology, or the classic “blue bible,” McDougall and Harrison’s Geochronology and Thermochronology by the 40Ar/39Ar method, which although focused on one system, has excellent background and review material. In addition, all national meetings commonly have thermochronology themed session, and of course this fall is the next International Conference on Thermochronology, this year in Chamonix, France. And of course, look for more content on the world’s leading thermochronology blog!

This entry was posted in (U-Th)/He, geochronology, thermochronology, Uncategorized. Bookmark the permalink.